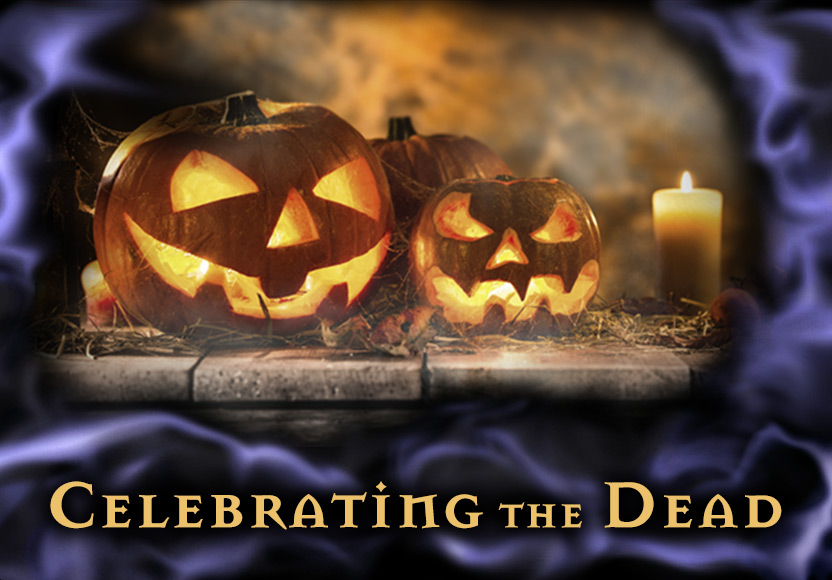 From their earliest beginnings, humans have had to face the great mystery of death. Over time, the wise learned to understand and honor this most profound of the rites of passage, guiding their peoples to understand these mysteries. They knew that even in the brightest of life’s moments, Death’s face would be peering from just beyond the shadows, waiting to leave his calling card. Death is humankind’s great lover, who courts and pursues us with a conviction no mortal lover is capable of.

Throughout history, humans have been led in a dance with death that is both fearful and romantic. Digging through the tomes of religion, myth, anthropology, folklore, and literature, we find the grim examples of death’s shadows cast over all cultures like the shrouds within dusty sepultures.

Megalithic people of Western Europe left dolmens, mysterious chambers of unhewn stone, typically capped with a larger stone. These dolmens were the burial places of great heroes, or marked to honor the spirits of faerie, who were believed to dwell within the hollow hills, a very strong connection to the underworld, and thus death. Food is still left out for the Faeries in parts of Ireland (and in many other places) today. The association between the Fairies and the spirits of the dead is one worth further exploration.

Later Celts, noble tribes of warriors and mystics, were known to offer a princely burial for their dead. The earliest Celtic graves of Hasltadt, Austria were found to have great stores of shields, swords, and torques— collars and armbands of metal. To the Celtic culture, we owe much of the modern Festival of the Dead, as their great feasting holiday of Samhain (sow-en), complete with political gatherings of the day and rituals to the spirits of faerie, remains the foremost holiday in modern Witchcraft.

In majestic Egypt, regal yet somber funerary processions made their way along the river Nile, making offerings of food and wealth to the dead and to their pantheon of funerary gods and goddess. The dead were mummified to preserve the body, which was wrapped in the finest of linens, ointments, and perfumes, and bedecked in gold, copper, and jewel-encrusted garments. The deceased were provided with the treasures they enjoyed in life: tools and utensils, books, fine garments, art, magickal amulets, and even great wealth of gold and gems.

Among the Native American Dakota Tribe, great mourning and wailing accompanied death. Women slashed their bodies till they bled. Men blackened their faces with ash. After the period time of wailing had ended, the tribes-people prepared a scaffold on which to burn the body of the deceased (the Norse had a similar method of sending their dead into the next world). The dead were clothed in their finest attire, their faces painted blood red to symbolize the power of life.

Much later, in the Victorian era, Death’s harvests were spun into gold. Ornate keepsakes were crafted from hair clipped from the newly deceased.  Bereft widows and mothers of the day would weave at death’s loom creating intricate artwork rich with sentiment and honor. Mourning jewelry  would be the final entombment of their lost loved ones. Death grinned from gilded cases studded with gems, on display in tiny mausoleums of crystal and gold. Perhaps the most enduring Deathly contribution of the Victorian age is the Spirit Board, also known as talking board or Ouija board. This still popular parlour game provided a way for both the expert and the novice to communicate between the living and the dead.

Turn of the century coffin makers carefully prepared their crafts by gathering up all of the shavings and saw dust, placing them within their morbid creation. For some believed that if any part of this final resting place should be brought into the home before its time, death might come calling before proper preparations could be made.

We cannot speak of a “festival” of the dead without mention of Dia de los Muertos, or Day of the Dead, celebrated each year in Mexico. Spanish Conquistadors arrived in the New World to find Meso-Americans of the area practicing a ritual, thousands of years old by that time, that seemed to mock death. In truth, these native peoples saw death as the extension of life, a passage to the next world, and thus it was not a mockery but a celebration. Festivities were held to honor the departed, not to belittle them. Unable to eradicate these practices, the Spaniards moved the ritual to coincide with the Catholic “festival of the dead,” All Hallow’s Eve, All Saints’ Day, and All Souls’ Day. The festivities, however, remained. This must have seemed as an ancestral homecoming of sorts to the Spaniards. The Catholics inherited their own days of the deceased from the Celtic Festival of the Dead at Samhain, which was a time of great festivity and feasting. The old wisdom never dies, and the Mexican people still honor the festive celebration of the dead inherited from both their Meso-American and European ancestors.

In old New Orleans, European, African, and native customs of the dead were also mixed. “Touissaint,” French for All Saints Day, is the only remaining American celebration of the old European Day of the Dead. Immortelles (elaborate mourning wreaths), candle burning, and dining with the dead are still held in New Orleans cemeteries on this day. Salem and New Orleans share a unique connection. Both vie for the title of number one Halloween celebration city and each share a historical link with both Voodoo and European magic. In New Orleans, where a history of frequent disease and death prompted celebration and festivity, funerals were often
accompanied by much revelry, evolving into such customs as “The Jazz Funeral,” “Death Watch,” the ever lively Wake—second only to to the Irish Wake in terms of mirth and cheer, and, of course, the Zombi!

Customs of the Dead are still practiced today by our so called “modern” cultures. What driver hasn't experienced the long fleet of illuminated cars led by the dark hearse. It is still considered to be extremely bad luck (and rather poor taste) to break this solemn procession. The dead command great respect, even in today’s “enlightened” world. You can still visit a cemetery to find offerings of flowers, candles, and yes, even food. This communion between living and dead shows how connected we all are by the true language of spirit.

Death can be heard in the call of the crow. He can be seen in the murky darkness just beyond the firelight. His everlasting love can be felt by the cold touch on your shoulder when you think no one is there. Death is always there, watching and waiting. His enduring presence reminds us that we all have set a date with him that he eagerly desires to keep.

Explore Death’s courtship with the living as we learn to understand his purpose and prepare ourselves to celebrate his arrival. Each event in Salem’s Festival of the Dead explores an aspect of death. We celebrate the spirit world, make contact with the departed, and confront our own mortality. Take part in death’s macabre customs, heretical histories, and strange rituals. From the mourning locket that holds the hair of the dead to the vast Parisian catacombs of bones, Death continues to captivate our imagination and beckon us to journey with him to destinations of mystery and wonderment.